Are Road Bikes Faster Than Hybrids? 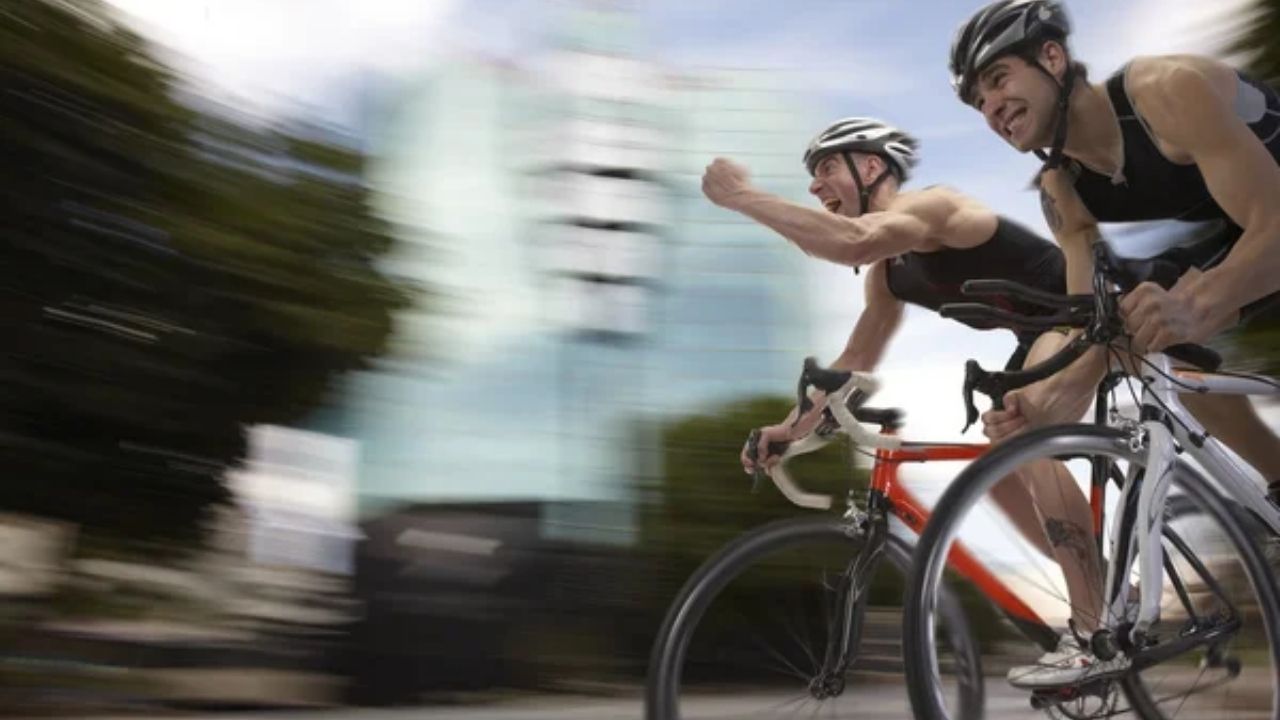 Are road bikes faster than hybrids? The simple answer is yes. There are a good few reasons why this is the case, and it is worth knowing what they are.

Road bikes are designed for their speed. They are not called racers for nothing. Hybrids are designed around comfort and bombproof reliability. As much as reliability and comfort are great qualities to have in a bike, they do have a detrimental effect on speed.

Put a road bike and hybrid side by side and the first difference everyone will notice is the drop handlebars. As funny as it may seem these drop handlebars can give you extra speed. The drop on the bars allows you to get into a very low position.

The lower you can get, the less chance you have of catching the wind. Aerodynamics is all about helping to design things to make them resistant to the wind. If you double your speed, you will have to work four times as hard to cut through the air, keeping everything else the same. Getting lower helps to reduce that burden.

The smaller your profile, the less there is to push through the wind. You will now be using less effort to keep going at the same speed if you fancy an experiment to see for yourself how this works. Go and ride a downhill that has the same gradient all the way down. Ride the hill without pedaling. Ride with your hands on the hoods, and you’ll accelerate to a certain speed and will then plateau. Drop down your bars, and you will accelerate again. Congratulations on the extra speed for no extra effort.

You might now notice the difference between the wheels and tires on the two different styles of bike. The tires and wheels will look narrower on the road bike. The narrower tire is important. As it is a lot thinner than the hybrid tire, it has less tire contacting with the road at any one point.

This contact patch means that you have more rolling resistance with the hybrid tires. With more tire in contact with the ground, there is more friction being generated. It takes more effort to overcome the friction. This friction is losing you speed on the hybrid bike. The road bike is being propelled more efficiently onwards.

Rotational weight would need an entire physics lesson to go through, but the general theory is that it takes twice as much energy to move a rotational object as it does a static object. A point you will hear often is that if a frame weighs a kilogram, so does a wheel. The wheel will take the same energy to move as two frames.

Are You Spoken For?

In short, if you are adding weight to your bike, you don’t want to be doing it to your wheels. Heavier tires will cost you speed over narrower tires. While we look at wheels, we should look at spoke counts.

Hybrids are designed to be reliable. Hybrids are also intended to carry loads, so they need some reinforcement. Hybrid wheels will have extra spokes compared to road bikes, usually around double the amount. The spokes might also be of a heavier variety, and they’re non-butted, as opposed to a road bike’s butted spokes. Butting means that the spokes have had the material machined out of them.

The wheel’s rims themselves will be stronger on a hybrid bike and may also feature extra walls and eyelets. An extra wall is like an additional rim within the rim. The eyelets are round reinforcing rings that you can see where the spokes meet the rim.

These features all require extra material. The additional material all adds extra weight, and that is mass that you have to overcome to get the bike going. If your effort is the same on a road bike as on a hybrid, the road bike will be faster because you are using less energy to overcome this weight.

Time to Go on a Diet

The suspension fork may also have another disadvantage for speed. As you pedal, it can cause your suspension fork to compress and rebound. We refer to this as pedal bob. Every bob is losing you speed.

Look at the chainrings, the cogs beside your pedals. You will see that a road bike has chainrings that are bigger than the hybrid’s chainrings. The bigger chainrings are designed to allow you to pedal at higher speeds more efficiently.

The hybrid’s gearing is designed to allow you to ride along with a load. It is assumed you will then not be racing. Here, your top end gearing is lower. With a lower top end gearing, you will not be able to hit the same speeds as you can on a road bike.

Road bikes are designed around speed and achieving top speed efficiently. Hybrids are also designed around getting you around reliably. That is why road bikes will always be faster than hybrids.