How Safe is a Bike in a Lightning Storm? 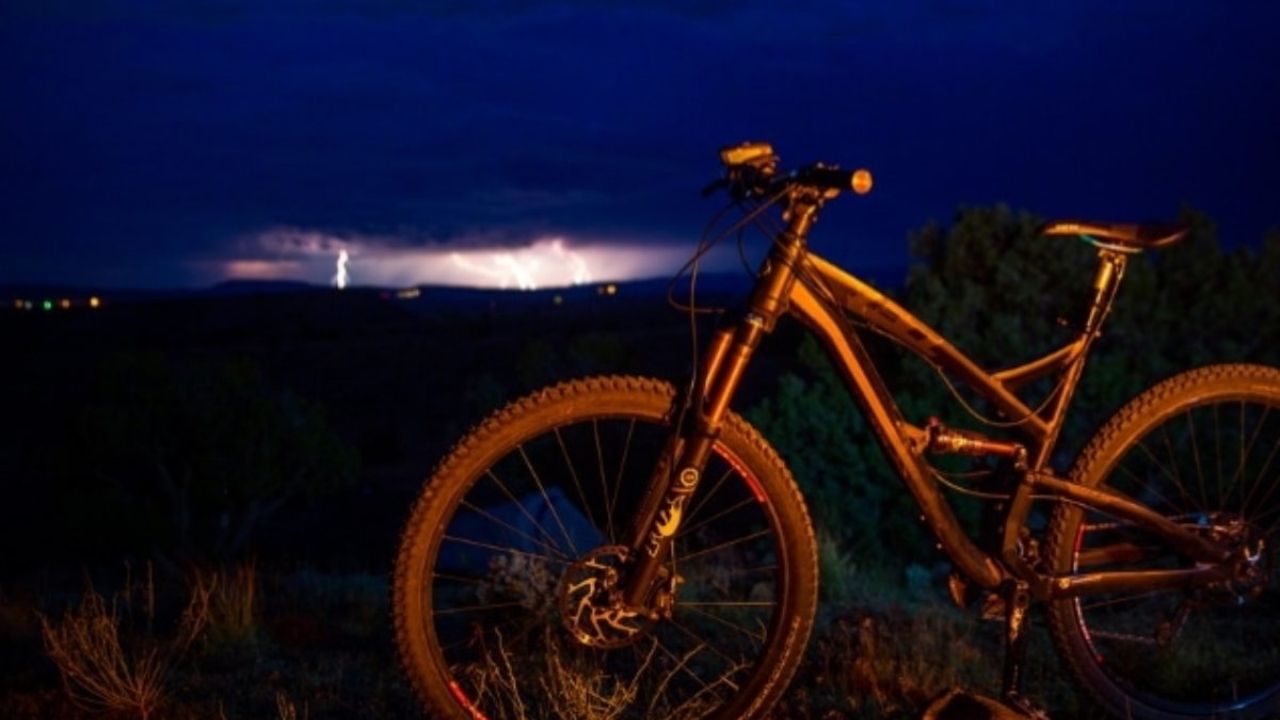 Some of the biggest dangers of cycling during a storm include being struck by lightning and colliding with other road users. As such, the safest place to be with your bike during a lightning storm is under a strong roof or within an enclosed conductive space.

Lightning moves at around 320,000,000 feet per second. That’s faster than anyone can ride a bike, which means you won’t be able to dodge or outrun it. How do you avoid getting hit by lightning if you suddenly get caught in a storm while cycling?

The following are some of the best tips from our experts.

Tips to Avoid a Lightning Storm

Rubber is an excellent electrical insulator, which is why technicians wear rubber gloves when handling live cables. However, the rubber on the tires of your bike is not enough to protect you from the dangers of being struck by lightning directly.

Why? Because the tires are underneath you, which means they can’t shield you from a direct hit.

What about an indirect hit? Bike tires still offer very little protection. That’s because each lightning strike is potentially 100 million volts and burns at 50,000 degrees Fahrenheit. Even much sturdier rubber insulation would have a hard time fending off such a force.

What if I get bigger tires? Even the tires on a car won’t keep you safe. If you are in a car that gets struck by lightning, the tires won’t offer protection. It’s the metal frame of the car that redirects the electrical energy around and away from you.

When it’s storm season, always check the weather forecast before heading out. While weather forecasts aren’t always accurate, they will give you a good idea of whether it’s safe to go biking that day.

If there is even the slightest chance of lightning and you think you can complete your trip before it happens, don’t take the risk. Thunderstorms can form very quickly and move very quickly. Regardless of how fast a cyclist you are, you most likely won’t be able to outrun a storm, which means your only option would be to find shelter.

The last thing you want is for a lightning storm to catch you on a mountain peak or an open road. On a mountain peak, you are more likely to get hit because you are on elevated ground and you are less likely to find shelter in such a place.

Finding shelter on an open road may also be an issue. When we say shelter, we don’t mean under a tree. A tree might offer some protection from the rain, but it provides little protection against lightning. If a tree you’re hiding under gets struck, you may suffer burns or an indirect hit that affects your heart. The risk of wind or a lightning strike knocking down a branch and it falling on you is just as bad.

In the absence of a building or bridge to hide under, try getting a lift. You’ll be far safer in a covered vehicle than riding your bike.

Water is a powerful conductor, and when exposed to electricity it makes things worse.

If you are wet while under shelter and waiting for a lightning storm to end, your body will have a harder time staying warm, in turn exposing you to all sorts of health risks. By finding shelter before the storm begins, you can wait it out without worrying about catching the flu or hypothermia.

When we say ride out the storm, we don’t necessarily mean keep pedaling until you escape it. If there’s no viable shelter nearby or a chance of getting a lift, the safest thing to do is to get away from your bike and crouch in the lowest place you can find.

By crouching at the lowest point, you reduce your risk of being struck by lightning. That’s because lightning is more likely to strike objects that are taller than you. You can’t do this forever, though. While hunkering down, you remain exposed, wet, and cold.

If the storm looks like it will go on for a long time, you may be better off braving the lightning storm and riding in the rain until you find real shelter. If it’s too windy or wet to ride, start walking.

Don’t be the person who thinks a lightning storm is the most exciting time to go cycling. Instead, avoid getting caught in such weather at all costs. If, for some unavoidable reason, you get caught in a lightning storm, find shelter ASAP – even if it’s under a bridge or in a car.

Don’t take shelter in a shed or any other small structure, or beside a fence or poles. Such structures, especially when made of metal, increase your chances of getting struck by lightning.

If you can’t find shelter and cycling is no longer possible, you might have to get off your bike and walk until you are out of danger.